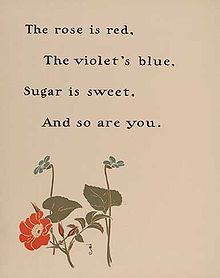 We’ve all heard (and some of us might have even written) some variation of the classic love poem “Roses are Red.” It’s a simple four-line stanza with an equally simple rhyme scheme:

And so are you

And while this poem in itself comes off as something like a simple nursery rhyme, what if I were to tell you that its origins transform it into but a piece of a much greater work? While the modern-day usage is far from word-for-word compared to its ancestral use, the similarities are quite clear. Roses are red and lemons are yellow.

It was upon a Sommers shynie day,

When Titan faire his beames did display,

In a fresh fountaine, farre from all mens vew,

She bath’d with roses red, and violets blew,

And all the sweetest flowres, that in the forest grew.

This excerpt is from the epic poem The Faerie Queene, written in 1590 by Sir Edmund Spenser, specifically Book Three, Canto 6, Stanza 6. For those of you who might not know, this poem is meant to reflect Elizabethan virtues (such as temperance, chastity, friendship and courtesy, among others) in the forms of various knights during their travels, as each of these virtues is challenged and tested. The work itself spans across seven different books, the seventh and final being incomplete, though Sir Spenser’s original intent was to compile a body of twelve separate books. But, I digress.

Other origin stories regarding “Roses are Red” can arguably be found in more content-similar sources. As the poem itself is one so simple in structure, content and rhyme scheme, it stands to reason to find that inspiration may very well have been drawn upon from the likes of actual nursery rhymes – in this case, “Gammer Gurton’s Garland: Or the Nursery Parnassus,” a collection of English nursery rhymes written by Joseph Ritson in 1784. The specific excerpt inclusive of the source for the modern-day poem is as follows:

The rose is red, the violet’s blue

The honey’s sweet, and so are you.

Thou art my love and I am thine;

I drew thee to my Valentine:

The lot was cast and then I drew,

And Fortune said it shou’d be you

Even more obvious than Spenser’s usage in “The Faerie Queene,” this practically shows the modern nursery rhyme verbatim within the body of the poetry itself. And considering the fact that this is literally from a book of nursery rhymes and how the poem is viewed in the modern day, it makes even more sense to associate the origins with “Roses are Red” to this work, whether many of us were even aware of its existence of not. There is, however, one body of work from which the poem may very well have evolved that many of us have heard about. The original two-line excerpt follows:

Translated from its original French, “The violets are blue, the roses are red, the violets are blue, I love my loves.” This is part of the body of a song sung by the character Fantine within the time-tested work Les Misérables by Victor Hugo. Some speculate that he may have been familiar with Spenser and his work, “The Faerie Queene,” and perhaps drew inspiration from such, though to say one way or another definitively is a rather moot point. However, it is still interesting to note how so simple a poem in both structure and content can have such a lustrous background concerning its possible origin story.