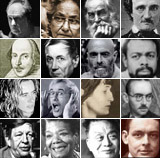 Poetry is all about emotion and imagination. Some of the best poems by the best poets are windows into the poet’s heart and mind. The most creative way to use language is through poetry, which is also the best way to put emotions and spiritual ideas into a language in a way that can be understood.

Many of us know the names of famous poets – Dickinson, Wordsworth, Shakespeare, Poe, Angelou, Frost, Yeats. But do you recognize any of these very famous poems? Let’s take a quick look at five of the most well-known poems, and see how much of them you know.

Stopping by Woods on a Snowy Evening by Robert Frost

Perhaps Robert Frost’s most well-known poem is about a patch of woods that belong to a neighbor, which the author observes while on a horse ride.  The quadrameter is attractive as Frost describes the scene with pleasant rhymes and colorful words in two stanzas. The piece ends with:

The woods are lovely, dark and deep,

But I have promises to keep,

And miles to go before I sleep,

And miles to go before I sleep.

Maya Angelou, (she’s from North Carolina, not from Dallas, Texas like many claim!) was a one-time Poet Laureate of the United States, having one of the most famous poems about woman’s power and mystery. She wrote about a woman’s confidence and answered the question that men seemed to not know why a woman who is not a supermodel can still be so attractive. She puts it this way in one stanza, answering the question why men “still can’t see” her mystery:

I say,
It’s in the arch of my back,
The sun of my smile,
The ride of my breasts,
The grace of my style.

The Raven by Edgar Allen Poe

Poe was a poet savant who passed away too young, and mainly of a broken heart. Much of his poetry was dark and anguished, some of it makes for great Halloween entertainment. He had several famous poems, but “The Raven” is probably his most famous, having been spoofed in a Halloween special of the long-running cartoon comedy The Simpsons. What was interesting is that the raven in the title doesn’t come into the poem until halfway through, and it’s introduced with Poe’s characteristic long meter and playful description:

Then this ebony bird beguiling my sad fancy into smiling,
By the grave and stern decorum of the countenance it wore.
“Though thy crest be shorn and shaven, thou,” I said, “art sure no craven,
Ghastly grim and ancient raven wandering from the Nightly shore –
Tell me what thy lordly name is on the Night’s Plutonian shore!”
Quoth the Raven, “Nevermore.”

Do Not Go Gentle into That Good Night by Dylan Thomas

A sad but powerful poem from Dylan Thomas, it is written as a final plea of a child to its father who approaches death. A child’s love is crying out for Dad to keep up the fight and to not go into the afterlife without a fight. It can often be used as a ballad for those fighting cancer or other difficult, life-threatening circumstances:

And you, my father, there on that sad height,
Curse, bless, me now with your fierce tears, I pray.
Do not go gentle into that good night.
Rage, rage against the dying of the light.

Walt Whitman is known for having bittersweet rhymes, and this ies perhaps oen of his most famous ones. It was immortalized in the 1980s movie Dead Poets’ Society, and the poem describes the “voyage” that is our childhood, captained by our parent or mentor. We celebrate the end of our journey (moving into adulthood), though our mentor has passed away from us. To wit:

My Captain does not answer, his lips are pale and still;
My father does not feel my arm, he has no pulse nor will;
The ship is anchor’d safe and sound, its voyage closed and done;
From fearful trip, the victor ship, comes in with object won;
Exult, O shores, and ring, O bells!
But I, with mournful tread,
Walk the deck my Captain lies,
Fallen cold and dead.