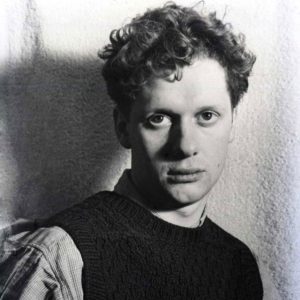 Dylan Marlais Thomas was born October 27, 1914 in Swansea, South Wales. And it seemed, from the outset of his life, he was destined for the field of literature. His father, an English literature professor, was known to recite Shakespeare to him as a young boy. This relatively simple act seemed to trigger what would soon become a great love for literature and – specifically – poetry. Thomas became particularly fond of the works of D.H. Lawrence, indulging himself in all of the English novelist’s poetry, and he went on to excel in English while neglecting all of his other studies. It wasn’t very long afterward at the age of 16 that Thomas would leave school altogether to pursue an early career in writing as a junior reporter for the South Wales Daily Post. And it wasn’t much longer after that, Thomas had lost his love of journalism and left his job to dedicate himself fully to his poetry, at the age of 18 years old.

It was within the period of his late teenage years that Thomas seemed to be the most prolific. Roughly half of his accomplished works are accounted between leaving school at 16 and moving to London around the age of 20, shortly after publishing “And Death Shall Have No Dominion” in 1933, which was featured in the New English Weekly. It was this first international publication that would spark interest in him, calling him to the attention of several editors of English literary magazines before moving to London shortly thereafter. His first collection of work would later be featured standalone in December of 1934 as “18 Poems.” Several other collections would soon follow, including “Twenty Five Poems” in 1936 and “The Map of Love” in 1939. Thomas’ work and perspective were also unique in that he generally broke away from contemporary tendencies to write about social or intellectual issues such as T.S. Eliot and W.H. Auden, preferring to concentrate his efforts more toward lyrical works and reflecting a mood akin to works of the Romantic period.

Unfortunately, as much as Thomas succeeded in the literary world, the other pieces of his life couldn’t seem to fall into place. During the height of his success as a writer, he wed a dancer named Caitlin Macnamara, and they went on to have three children. However, much speculation would later come about the fidelity of their marriage, even suspicions that both he and Macnamara may have been involved in affairs apart from each other. Thomas also struggled financially at a time where he succumbed greatly to alcohol abuse. He took work for the BBC during World War II as a film scriptwriter, in which he contributed to over a hundred radio broadcasts, one of which would later inspire his radio play “Under Milk Wood,” written in 1953. Thomas even supplemented this income with reading tours – reading tours that were more often characterized as “flamboyant performances – which would eventually see him on his way to the likes of Italy, where he would be inspired to write his most famous poem, “Do no go gentle into that good night,” as well as the United States, where he would tour four times in his life. It was unfortunately there, in New York City, on his last tour that Thomas would meet an unfortunate and untimely demise. Having collapsed at the Chelsea Hotel, Thomas passed away only a few days later at St. Vincent’s Hospital on November 9, 1953. It was discovered Thomas had died of pneumonia, swelling of the brain, and a fatty liver.

Despite the issues surrounding many aspects of his life, Dylan Thomas was most remembered for his contribution to the literary world, both for his work and for the performances of his works, reviving with vigor such traditions as lyricism and reinventing the Romantic poet during his time in America, where he was renowned for being “flamboyantly theatrical” and reading his poetry “with tremendous depth of feeling and a singing Welsh lilt.”