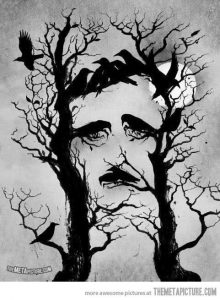 As we get ever closer to Halloween, one of the favorite activities of some families is to read some of the classic works of Edgar Allen Poe.

After all, who else in American literature has such scary and macabre stories and poems, focused on death and lost love? Edgar’s our man when it comes to Halloween.

One of the favorite Halloween poems is “The Raven,” which was successfully spoofed by the animated show The Simpsons during a Halloween special.

Poe developed quite a legacy with his short stories and poems, all revolving around death, lost love and the macabre in general. “The Raven” is one of those poems that can be analyzed to be about either death or lost love, or perhaps both. The symbolism can be interpreted in a number of ways, and let’s take a quick look at a couple of these symbols and what they could mean.

Of course in a poem known as “The Raven,” it would only make sense to spend a little time discussing the title character. The raven tortures the narrator of the poem, especially with his incessant “nevermore” reply. But what does the raven mean in the poem?

The narrator refers to “Lenore” a few times in the piece, and the raven is asked about Lenore. While the Lenore symbolism will be discussed in a minute, the raven could either be seen as death (due to the dark color of the bird, which is often correlative to death) or could be symbolizing the Grim Reaper taking away Lenore, that lost love. Another idea has to do with Lenore not being an actual person but a symbol of love, where the raven is a reminder to the narrator that death is coming and overrules any positive emotion in this mortal existence.

Lenore is clearly a symbol and is not referring to an actual person. At least, that seems to be the idea, because Poe takes no effort to explain anything about her.

We know from Poe’s biography that he did have a true love lost in his life, a woman whom he was infatuated but was forbidden because she was married to someone else. Then she died quite young and it tore Poe’s heart.  Perhaps Lenore is a memory of that lost love, and the raven represents death which took her away from the narrator and tortures the narrator’s heartbreak.

Another possible explanation is that Lenore could represent life eternal, or hope and optimism, while the raven is reality of death and the finality of mortal existence, and as much as the narrator wants to “focus” on what is possible with Lenore, the raven never fails to dominate the room, showing that escaping death can never happen. It’s like paying taxes.

Flight of the Raven

Which direction “The Raven” actually goes is up for healthy debate, but it seems pretty clear that both of Poe’s favorite themes – death and lost love – are showing in colorful words straight from the heart of Poe, one of the great writers in American history, and the darling of Halloween.