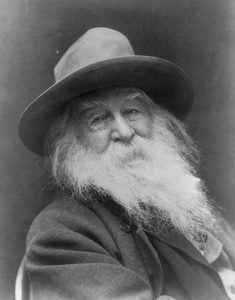 O Captain! my Captain! These famous words have been uttered countless times around the globe, becoming nearly commonplace. However, many do not know their origin — Walt Whitman’s beautiful poem published in his book, Leaves of Grass:

O Captain! my Captain! our fearful trip is done,
The ship has weather’d every rack, the prize we sought is won,
The port is near, the bells I hear, the people all exulting,
While follow eyes the steady keel, the vessel grim and daring;
But O heart! heart! heart!
O the bleeding drops of red,
Where on the deck my Captain lies,
Fallen cold and dead.
O Captain! my Captain! rise up and hear the bells;
Rise up—for you the flag is flung—for you the bugle trills,
For you bouquets and ribbon’d wreaths—for you the shores a-crowding,
For you they call, the swaying mass, their eager faces turning;
Here Captain! dear father!
This arm beneath your head!
It is some dream that on the deck,
You’ve fallen cold and dead.
My Captain does not answer, his lips are pale and still,
My father does not feel my arm, he has no pulse nor will,
The ship is anchor’d safe and sound, its voyage closed and done,
From fearful trip the victor ship comes in with object won;
Exult O shores, and ring O bells!
But I with mournful tread,
Walk the deck my Captain lies,
Fallen cold and dead.

As well written as this poem may be, it can only be truly appreciated after understanding its meaning. The poem itself is an elegy, or a somber poem reflecting and lamenting on the dead. In this case, it is an elegy to a Captain who recently passed away. Further, it is celebrating the safe return of their ship to its home port. Whitman starts off by describing the hardships at sea, but contrasts this with the cheers of the people on the mainland — celebrating their return. Unfortunately, he then goes on to reveal that the captain lies on the deck, “fallen cold and dead.” In the following stanza, Whitman begs the captain to rise again and witness this splendid scene of joy, joy induced by their successful return. Further, he states that the captain is loved by the masses: “For you they call, the swaying mass, their eager faces turning.” Yet, this matters not, as the captain remains dead, albeit it all just feels like “some dream.”

In addition to the aforementioned analysis, many feel that Whitman intended this poem to have a much larger meaning. The poem was written shortly after President Abraham Lincoln’s untimely death, as he was assassinated in a theater by John Wilkes Booth. Thus, it is believed that the captain is a metaphor for Lincoln, who was adored by many. The ship then represents the war-plagued nation, finally freed from the woes of the Civil War. Knowing this, the poem takes on an entirely new, righteous significance. As with many other poets, Whitman’s poetry is best appreciated after an in-depth look.